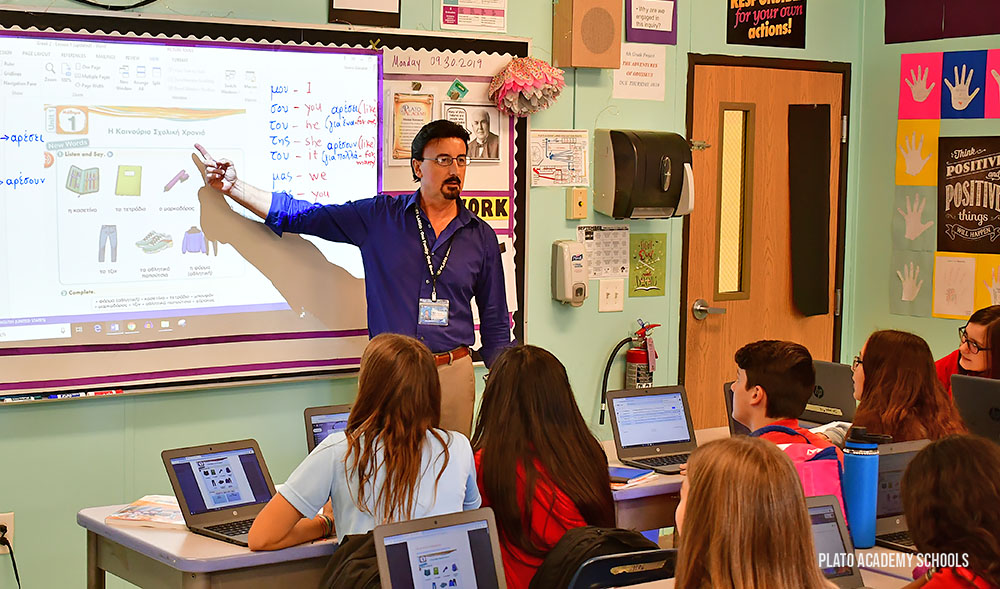 The day began with the Star Spangled Banner played through the speakers of the classroom’s interactive board, followed by the Pledge of Allegiance and the National Anthem of Greece. The 8th graders sang the Greek anthem without difficulty.

This is a typical start to the day for all classrooms at the nine campuses of Plato Academy schools (Seven in Pinellas county, one in Pasco and one in Hillsborough). So, what is so special about Plato schools? Apart from high academic standards and the small family-like setting, Plato ensures that all students are learning the Greek language! Mr. Ioannis Giavaras is one of the Greek teachers teaching at Plato Academy of Largo in Florida. 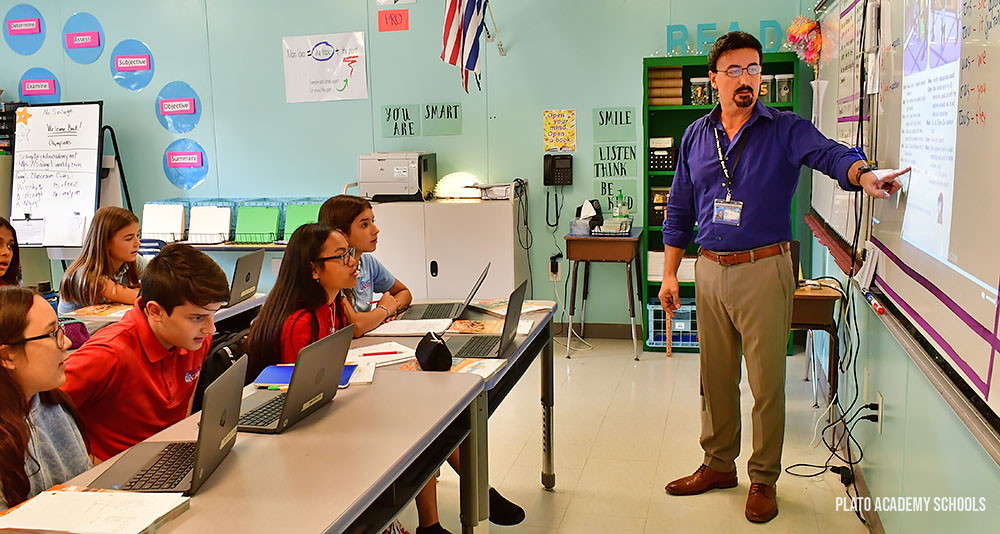 Although there are about three million Greeks living in the United States today, being able to communicate with the Greek community was not the main reason for this choice. The founder of Plato Academy Schools, Steve Christopoulos who untimely passed away on June 27, 2018, had a vision that extends further. In his words, he wanted Plato Academy Schools: “To be a place where children feel safe, respected, nurtured, and challenged in ways, as ancient Greek philosopher Plato recommends, that ignite their imagination, inspire their spirit, and find their unique genius. To give them educational experiences that they will cherish for the rest of their lives.” 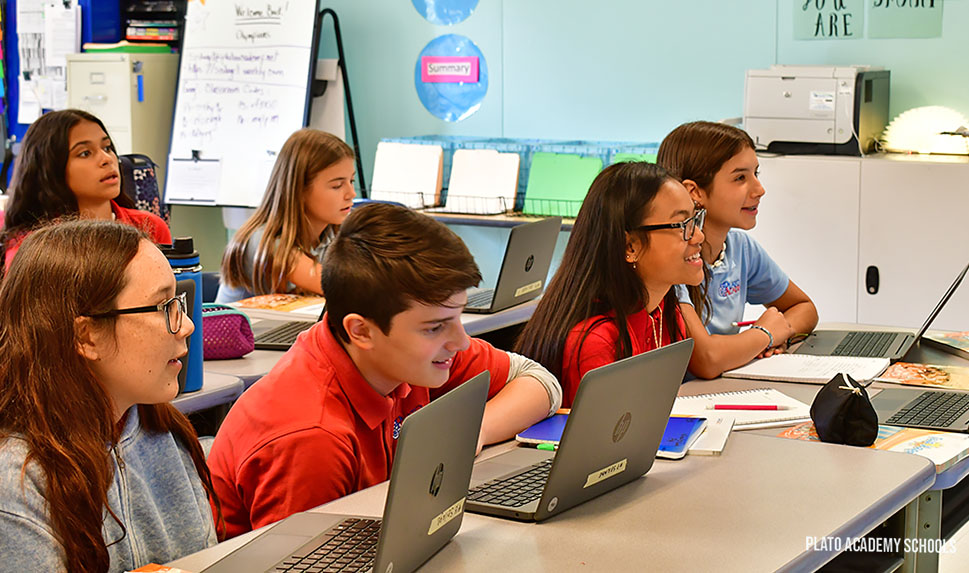 Studying Greek history, culture, and language gives students a strong sense of the origins of democracy and the philosophical underpinnings of Western thought.
The students are engaged in conversations, listening and answering questions verbally, and writing while accessing the class online resources using their computers. “Recorded audio of the teacher reading the text is also available online. By listening to recordings, students can practice their reading skills or get familiar with the pronunciation even outside the classroom. At Plato we enjoy using technology daily” noted Mr. Giavaras.

At Plato Academy, every day, students receive instruction in a language that helps them to develop new ways of speaking and more importantly, new ways of thinking about their own language and the languages of medicine, science, law, and engineering.’’

When asked “How hard is it to learn Greek?” Mr. Giavaras replied: “It’s not much different than learning almost any other language. It may be difficult and confusing in the beginning, but it gets better as things start to make more sense. What’s more important is that the students enjoy the process”. 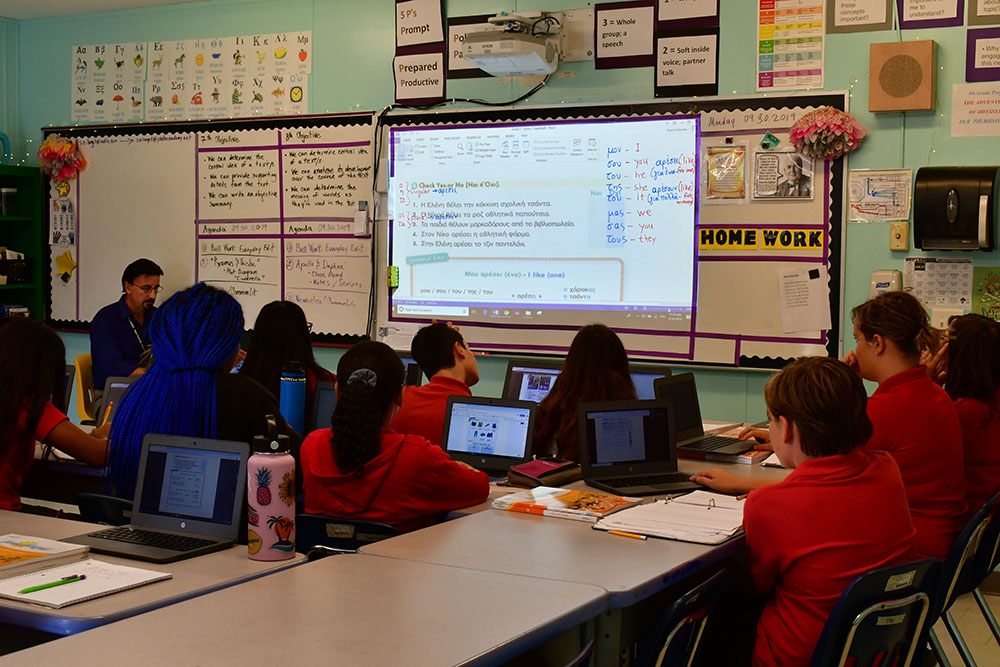 It is also noted that many words are the basis of the English language, and by learning Greek students increase their English vocabulary too. An early start is important, so that’s why students start learning Greek in kindergarten.

In addition to learning how to speak Greek, learning about the origins of democracy, the ideas of the ancient Greek world, and the diverse and interconnected myths and legends of the Greek mythology, provides an understanding of our western culture. It’s not a coincidence that many space programs were named after Greek gods and heroes; they encompass symbolism. For example, the Artemis program succeeded the Apollo program to continue space exploration. These are also names of constellations, which are derived from heroes of Greek mythology, implying mythological symbolism and importance. 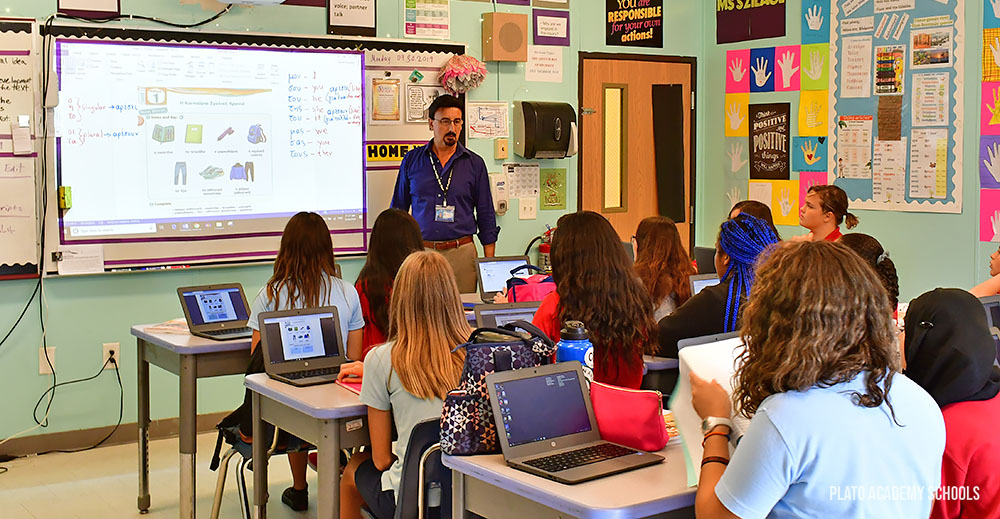 Mr. Giavaras is one of the twenty five Greek language teachers currently teaching at Plato Academy Schools. Many of them are born and raised in Greece and were delegated by the Greek Department of Education to teach the Greek language and culture around the globe. This exchange opportunity is educational for both the students and the teachers!