Ms. Catherine Flaherty is a very successful Art teacher at Plato Academy but her creativity extends to other forms of expression like writing. As her Plato Academy family, we are excited for her being among the recipients of the 2018 Richard Dewey Award for her heartfelt and inspiring story about a teacher who was such a positive influence in her life.

Her story reminds us all in the educational community how decisive our impact is on our students.

This is her story: 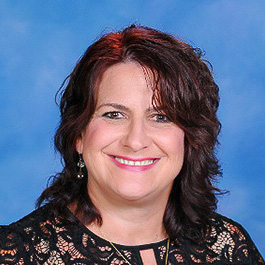 He was stocky with a receding crew cut, thick glasses and a voice deeper than the Grand Canyon. He could teach our class equations-PROFICIENTLY-from a reclined office chair and feet up on his desk. His name is Mr. Pittenger and he was my 6th-grade math teacher.

Mr. Pittenger had a way of controlling our class without standing up or raising his voice. You see, he was a former military man, and used that experience, his deep voice, and a little sarcasm to keep the class in order. Troublemakers stayed in line, the slackers got moving, and the well-behaved were commended in Mr. Pittenger’s class. He wasn’t the conventional teacher and probably didn’t take classes on differentiated learning or redirecting behavior, but students were in line and material was instructed. Most importantly, we learned algebra.

Back in the 6th grade, I was quiet, reserved, studious and excelled in school. I was thin, pale and anemic. I had a small circle of friends but didn’t have much fun. I was also an easy target for Jennifer V., a big bully in our 6th-grade class. As I was walking home one day at dismissal, Jennifer V. hit me with her bike in the middle of 142nd Avenue. I laid there in the road, stopping traffic, crying and bleeding, with a sprained ankle…until Mr. Pittenger and Mr. Redman arrived. Mr. Redman was another favorite teacher of mine. Imagine a red-bearded lumberjack and you’ve envisioned Mr. Redman. Effortlessly, they scooped me up and carried me inside the school. I returned to school a few days later, fearful of the repercussions of Jennifer V. and my mother, who now had a vendetta to fulfill against the bully.

To my surprise, Mr. Pittenger and Mr. Redman presented me with a veggie tray and a message: ‘You were so heavy being carried in after your “accident” that we thought you could use this to lose a little weight.’ Again, not a conventional, “teacher move” but it made me, and more importantly, my mother, LAUGH. The rest of the year went off without a hitch. I recovered, started to stand up to Jennifer V. and earned all 4 PRIDE awards at the end of my middle school years. I began babysitting for Mr. Pittenger’s two sons all through high school. Mr. Pittenger and his wife, Jan, treated me like family.

At the end of high school, I was pondering the next course in life to take, law enforcement or teaching. I turned to Mr. Pittenger, also a former military police officer. He could see my angst in wanted to get started right away and steered me towards law enforcement.

Note that by the end of high school, I was no longer the quiet, reserved young girl but rather an outspoken and fun-loving teenager. Everything fell into place and I became a Clearwater police officer at the age of 19. For the next 14 years, I worked in patrol, training, was an undercover detective for several years and eventually taught in 14 elementary schools as “Officer Friendly.” Mr. and Mrs. Pittenger came to my wedding. Occasionally, Mr. Pittenger and I would meet for breakfast and I would share interesting cases from work with him.

We caught each other up on the paths of our children. His sons followed in his footsteps and joined the military. Mine were still babies. He continued to ask me to call him Jim as I was now an adult and had four kids of my own, but I couldn’t. He would always be Mr. Pittenger to me. As life does, mine had its peaks and valleys. I have been an Art teacher at Plato Academy for the past 5 years. I’ve fulfilled both my dreams I once had as a high school graduate…and many more unsuspected ones.

That is a story I now share with students. You can be anything you want…and more. I haven’t spoken to Mr. Pittenger for several years, but our last breakfast included an invite to his cabin in Tennessee. The kids and I could vacation there and visit him at his new job at Dollywood. I could share that I am now, also, a proud parent of a soldier.

My oldest son is 18 and is now a Marine. I think I’ll go call the man with the heart and voice deeper than the Grand Canyon and tell him, “Thank you, Mr. Pittenger, for being my teacher.”

You can read more about the Richard Dewey Awards on this page: https://charterschoolcapital.org/blog/2018-richard-dewey-award-winners/